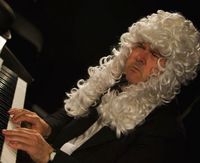 Welcome to my Blogatelle in D.  Based of course on Bagatelles.  Beethoven is a composer who had a lot of time for bagatelles, taking them for long walks in the countryside around Vienna, before getting a couple of Schnauzers instead.  But he didn’t compose anything for them.  You will look in vain for a Schnauzer in E Flat, but there are literally litters of bagatelles.
Now musical terms are perfectly logical.  Just as the term ‘Sonata’ for example derives from the Italian word ‘sounded’, so the term ‘bagatelle’ has absolutely nothing to do with bags; although Beethoven probably had them under his eyes by the time he’d finished writing thirty of them.
Beethoven did finish composing all his bagatelles, but have you noticed how unfinished things seem to be celebrated these days?  And regularly performed!  Take Schubert’s Unfinished Symphony - wonderful!  But it’s funny that people don’t respond in the same way to unfinished work in the other crafts. Builders for example. Only three walls erected, no roof: but look at the artistry!  Just think of what they could have completed had they survived. And not gone bankrupt. Or not disappeared with the money.
I have chosen D major as the key today.  D major is a light, bright key, which has an F sharp and a C sharp although not all singers bother with them.  Haydn liked writing in D, especially in the morning after breakfast. A sprightly joyous allegro would emerge from the coffee and croissants, whereas the slow movement would come after the wiener schnitzel and potatoes around 6pm, generally in a minor key if the meat was underdone.  Musicologists generally agree that his String Quartet no 53 in D probably came after a good Esterhazy estate brunch.

I shall devote a whole blog, a veritable Hogatelle, to food and music, in one of my next despatches.  Meanwhile my sponsor has asked me to bring things to a close with a perfect cadence:  the Dominant - Tonic.   Schweppes!